My time: 7:36. 88% of prescribed weight. A part of me thought I could maybe do it prescribed, but I was still the last one done with 75#, so I guess it's good I didn't go to 85#. I think I could do it faster, but it just takes me a long time to mentally reset between reps. I need to learn how to think less, I guess. But I felt like my form was on, so that's good.

My Grace history:
Okay, January was six months ago, but holy crap, that was a big jump, plus I got my time down too. Very happy with that. If I'd gone with 65#, I think I could have smashed it, but I really want to get to Rxd with these named workouts. Almost there with this one.

Tim is no longer posting the workouts ahead of time, to keep people from "cherry picking". Well, if you're in the 5:30 class, I guess you can read 'em here. James D. and I talked, and we think we're more "lemon pickers". We aren't planning on coming in, read that it's a really awful workout, and that makes us come in for it (especially true for me for Fridays and Saturdays). So the new no-pre-posting rule is kind of demotivational for both of us. Some people were pleased that the workouts will be a surprise. I guess there are two kinds of people in this world, those that like surprise parties and those that hate them. Guess which kind I am. Tim, you are on my list for this. But I will TRY to adjust. Ugh, you are so mean.

I want to go home and make an Aloha Smoothie (from goodLife {eats}). Looks really yummy, and without the marmalade (ew anyway) would be totally Paleo-friendly. But alas, I have to work. Maybe I'll stop at the store on the way home and pick up the ingredients. Mmmmm... 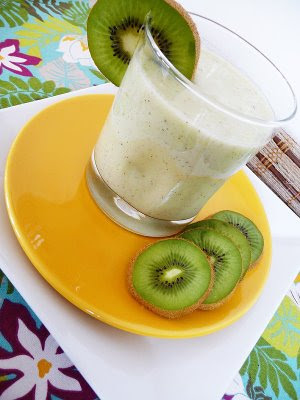 Credit: Photo from here
Posted by Amy at 1:04 PM

Add a shot of light rum to the Aloha Smoothie and see how it tastes.
Dad

Rum is not paleo!!

I believe the verdict is still out on tequila though...

The only reason I like seeing the workouts ahead of time, is so that I can check my time or rounds or whatever, the last time I did it. Just in case I happen to look at the clock during the workout and then I know where I stand.
I AM NOT A CHERRY PICKER!
I whine and do just about every workout.
Great job today on your Grace weight and time! Well Done!